A REPUBLICAN INSTITUTION IN THE TOWN OF BOSTON

The undersigned, a committee appointed at the annual meeting of A Republican Institution in the Town of Boston, held on March 4, 1893, "to print the by-laws and such other matter as in their opinion would be of interest to the members," respectfully submit the following statement of facts relative to the origin and history of the Institution.

At the time of the formation of this society the two great political parties in the country were the "Republicans” and the "Federalists." The Republicans, as a party, originally favored a strict construction of the Constitution of the United States with regard to the powers of the general government, and were jealous to preserve the rights of the several States. The Federalists, on the other hand, were inclined to magnify the powers of the general government at the expense of "State Rights." Thomas Jefferson, James Madison, and James Monroe had been leaders among the Republicans, and John Adams, Alexander Hamilton, and Aaron Burr among the Federalists.

In 1819 the Republicans were in control of the general government, their candidate, James Monroe, having been elected President in 1816, and being in possession of that office when this "Republican Institution " was formed. The State government of Massachusetts was, however, at this time in the control of the Federalists, their candidate, John Brooks, having been Governor of the State from 1816 to 1823. The Republicans continued in control of the general government under the Presidents who succeeded Monroe, namely, John Quincy Adams, Jackson, and Van Buren; but the party gradually became known as the "Democratic-Republican," and finally as simply the "Democratic" party, — a name which it retains to the present day.

The first mention of a "collation" at one of the meetings occurs in the record of the annual meeting in March, 1831. The records also show that an "elegant entertainment" was served at the "Bromfield House" in March, 1844, and that in 1850 a committee reported that they had "provided a supper for members of the Corporation, but from the numerous attendance on these occasions had found it difficult to confine themselves within the limit of fifty dollars authorized by a vote of the Corporation some years since, when the attendance was much less."

In 1824 the Institution began to refund to members, who wished to withdraw, the amounts that had been paid by them; and the majority of the members at this time availed themselves of this opportunity and gave up their membership, and thus the membership of the society became largely reduced from its original members. In March, 1852, it was voted to refund $20 on each share that had not already been redeemed, leaving the holder of the share still entitled to all the rights of membership.

We also print herewith a list of the first officers of the Institution.

It being absolutely necessary that the Republicans of the Town of Boston should be possessed of some respectable building wherein they may meet together to transact their business, and also a place to receive their Brethren from all parts of the Union,

We, the Subscribers, do therefore agree to purchase or build a place for that purpose by subscription. Each Subscriber may have the privilege to take any number of shares not exceeding four. The amount of each share shall be twenty-five dollars, and, as soon as four hundred shares are subscribed for, such measures as shall be deemed proper shall be taken to procure the contemplated building.

The payment to be made by instalments of ten per cent on each share every three months after the subscription is completed till the whole is paid in.

AN ACT TO INCORPORATE WlLLIAM INGALLS AND OTHERS INTO A Society By The Name Of A REPUBLICAN INSTITUTION IN THE TOWN OF BOSTON.

Section 1. Be it enacted by the Senate and House of Representatives, in General Court assembled, and by the authority of the same, That William Ingalls, Ebenezer Clough, Joseph N. Howe, Abraham H. Quincy, Peter P. F. Degrand, Jonathan Simonds, Daniel Adams, Robert H. Thayer, Thomas Badger, Thaddeus Page, Davis C. Ballard, Rolun Hartshorn, and William Gale, together with all others who now are, or hereafter may be, associated with them, be, and they are hereby, constituted a body politic and corporate forever, for the purpose of procuring a building, and keeping it in repair, with suitable apartments for a reading-room, library, and the meeting of the said society, by the name of a Republican Institution, in the town of Boston; and by that name may sue and be sued, plead and be impleaded, answer and be answered unto, defend and be defended, in all courts and places whatsoever, in all actions, real, personal, and mixed; and the said corporation shall have full power to make, have, and use a common seal, and the same to break, alter, and renew at pleasure; and shall have, exercise, and enjoy all the powers and privileges incident and usually granted to other corporations of a like nature and purpose.

Section 2. Be it further enacted, That the said corporation be, and the same is hereby, made capable in law of having and holding, by gift, grant, devise, or otherwise, any estate, real or personal, provided the same shall not exceed the annual income of five thousand dollars. And the said corporation may annually, or at any special meeting called for the purpose, make, establish, and put in execution such by-laws, rules, and regulations as to calling future meetings, the election of officers, and the admission of members, as they may judge to be necessary and expedient; provided that such by-laws, rules, and regulations shall not in any case be contrary to the constitution and laws of this Commonwealth.

Section 3. Be it further enacted, That any three of the persons named in this Act be, and they are hereby, empowered by advertisement in any one or more newspapers printed in Boston, to call a meeting of the members of the said institution, to be holden at such convenient time and place as shall be appointed in said advertisement, to organize the said institution by the election and appointment of its officers. 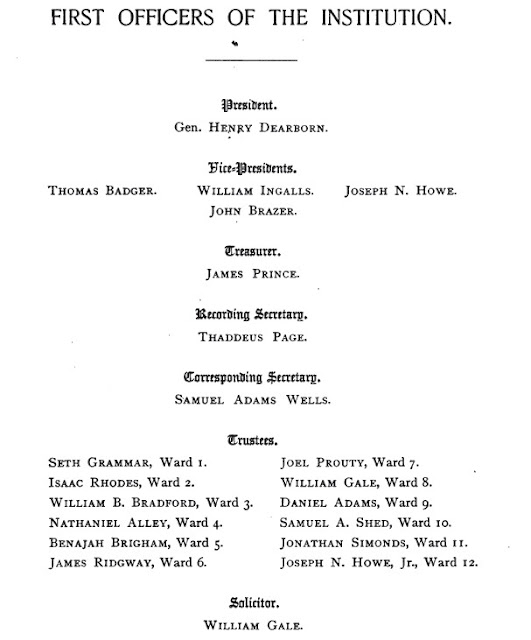 FIRST OFFICERS OF THE REPUBLICAN INSTITUTION

The officers of the Institution shall be a President, four Vice Presidents, a Treasurer, a Solicitor, a Corresponding Secretary, a Recording Secretary, and twelve Trustees, who shall collectively form the Government thereof, all of whom shall be annually elected, by ballot, by the members of the Institution, and serve until their successors are chosen and shall have accepted office. No officer of the Government shall receive any fee or pecuniary compensation for his services.

The Seal of the Institution shall bear the inscription,— " A Republican Institution, Chartered February, 1819."

The President, or, in his absence, the Vice-President, Senior in order of election and present, shall preside at all meetings of the Institution.

In the absence of the President and all the Vice-Presidents, a presiding officer, for the meeting, shall be chosen from among the members of the Institution.

The Government shall annually elect, from the members thereof, a committee to be called "The Executive and Finance Committee," who shall have, subject to vote of the Government, the direction of all receipts and disbursements of the Institution, and the supervision of the funds and property thereof.

The Treasurer shall collect and receive all funds of the Institution, which he shall deposit, invest, and hold in the name of the Institution, in such manner as may be ordered by vote of the Government; and, under direction of the Executive and Finance Committees, shall disburse the same.

He shall keep the accounts of the Institution in books belonging to it, which shall at all times be open to the inspection of any member of the Government.

He shall have charge of the Seal of the Institution.

The Solicitor (who shall be some gentleman learned in the law) shall draft all legal instruments, and give legal advice, when required by the Government, in relation to the business of the Institution.

The Corresponding Secretary shall write all letters of correspondence, circular letters, and other communications which may be necessary or required by a vote of the Institution or of the Government, and of which he shall keep a record. He shall keep a file of all official letters or other written communications that he may receive, for the reference and inspection of the officers and members of the Institution.

The Recording Secretary shall issue the proper notifications for all such meetings of the Corporation, or of the officers thereof, as may be called in pursuance of these regulations. He shall be present at all such meetings, and keep a fair record of all their important proceedings, to be open at proper times for the inspection of any member of the Institution; and, in case of the sickness or inability of the Recording Secretary to attend, a Secretary pro tern, shall be chosen.

ARTICLE IX.
MEETINGS OF THE GOVERNMENT.

ARTICLE X.
MEETINGS OF THE CORPORATION.

The annual meeting of the Corporation for the choice of officers shall be holden on the fourth day of March (or, if it comes on a Sunday, then on the succeeding Monday). Notice of the time and place of all meetings, whether stated or special, is to be given by the Recording Secretary in one or more newspapers printed in Boston, and by printed notifications to each member of the Institution, at least one week preceding the time fixed for such meeting.

No vote or other act of the Corporation shall be reconsidered at any subsequent meeting thereof unless there be as many members present as at the time of the passing of such vote or act.

Rights of membership or shares in the Institution shall not be transferable, and upon the death of a member his share shall revert to and become the property of the Institution; and the Treasurer shall, if demand therefor is made upon him, pay to the executor or administrator of the deceased member the sum of .one hundred dollars.

Whenever, by the death of a member, a share becomes the property of the*Institution, the Government may at any time cause it to be reissued to a person named by them, who, upon paying to the Treasurer the sum of one hundred dollars, signing the by-laws, and receiving and receipting for a certificate of membership, shall become a member of the Institution. The Government may also issue certificates of membership upon the receipt and cancellation of certificates now supposed to be in existence and outstanding in the names of the following persons: Joseph Hawkins, Joseph N. Howe, Samuel G. Perkins, and Francis Gardner. In the reissue of a share, a relative or connection of the deceased member shall, if unobjectionable in character, have a preference, or, if no application for the share shall within one year of the decease of the member be made by a person entitled to such preference, the relatives and connections of any member shall be entitled to a similar preference.

Certificates of membership in the Institution shall be in the following form, and shall be signed by the President and Treasurer : —

A REPUBLICAN INSTITUTION.
Chartered in 1819 by the Commonwealth of Massachusetts.

In Witness Whereof the seal of the said Institution is hereto affixed and this certificate signed by its President and Treasurer this ______________  day of - in the year _____.